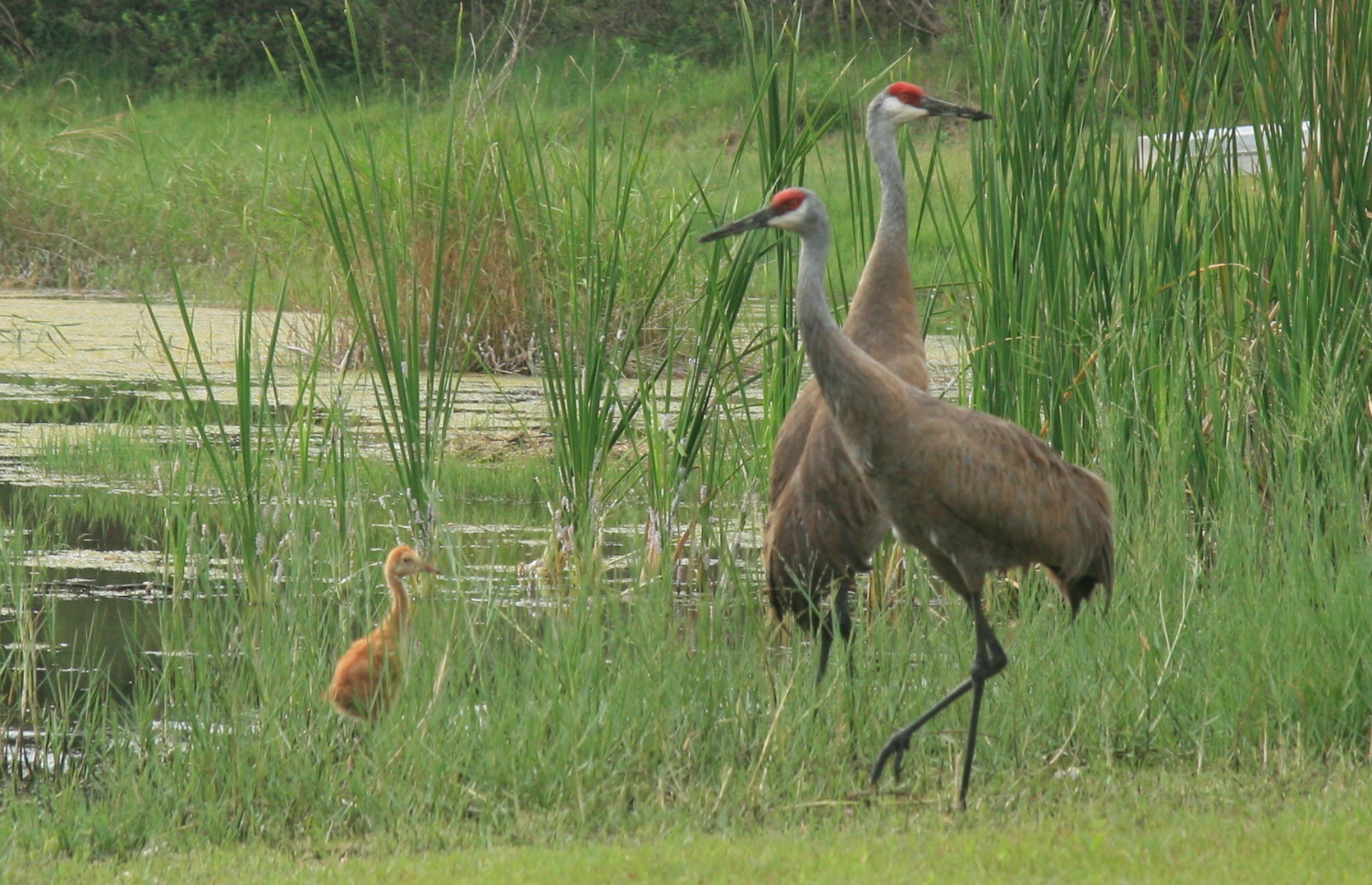 The English professor covered the boardwalk in her efficient stride. Amazed, yet again, at the abundant Florida wildlife. The week before, she encountered her first alligator, an eight-footer, lounging in a colleague’s backyard while she navigated anthills the size of dinner plates. Now, she was eye-to-eye with two enormous birds.

The cranes, the colors of wet stones, opened their vast wings and began their happy dance, nodding and bobbing heads to an instinctual beat.

On the beach, sunbathers smiled as the birds flapped wings and pumped pogo-stick legs. A young mother glanced from her romance novel. Her two-year-old son clapped and shrieked with laughter.

Wings collapsed like deflating balloons. The birds poked their beaks woodpecker-style into the earth.

The boy stood on stubby legs and sprinkled sand over his mother’s paperback.

Hungry for more than the mere snack this beach had supplied, the male crane bent his head. The female mimicked her mate. A running start projected the pair airborne. They warbled goodbyes. The boy waved a gritty hand.

On the other side of the lake, the cranes landed in a grassy, insect-infested paradise. They foraged for food. The child grabbed his shovel and stabbed at the sand. Frisbee games and swimming races resumed.

So engrossed in the crane spectacle, the professor found herself seated on a bench. Breathing warm briny air, she took off her sunglasses and placed the stem in her mouth. She quickly removed it and reprimanded herself for not breaking this habit. Every pair of glasses, for reading or sun, bore the marks of grinding canines and stress of a demanding job.

Belly-filled birds returned and landed inches from where they began. The teacher looked at her watch. In five minutes, dozens of noisy self-absorbed students would enter an auditorium where they heckled or ignored.

She mourned the relaxed schedule of her high school teaching years, free as a flamingo, June, July, and August. Each summer, she pondered possibilities the new school year might bring. But every September, a fresh group of disinterested students presented a boring and predictable repeat of the year before—the incentive to earn her Ph.D.

Bits of sand and Spanish moss stuck to the professor’s linen skirt.

With bulging crops, the cranes prepared for a nap. With one leg raised, the female gestured to her mate to do the same. They were used to humans and stood close to the toddler who had a front row seat in nature’s theater.

The professor felt her blood pressure ease. If I could begin every day . . .

Curious as the child, the professor wondered, Were they sleeping? When the birds were free from gawking beach-goers, did they lie down to rest?

Ambling towards the building where she spoke non-stop for forty-five minutes, three times a day, for the rest of the summer, the professor longed for fall.

The boy’s legs wobbled on the uneven sand. He tossed clumps of seaweed and shells, each fistful landing closer to the birds. The professor glared at the mother, her nose buried in her book.

She congratulated herself for not procreating. For conscientious parents, she noticed, childrearing was exhausting. And they often faced bad-tempered teenagers at their breakfast tables. The professor shuddered.

The mother pulled her paperback closer to her face.

No doubt fantasizing about making love to some guy named Fabio. The professor jabbed the stem of her sunglasses into her mouth. Her anger ground away as the boy held a large shell in the air.

If he hurts those birds . . .the boy threw the shell and the professor hurled her sunglasses. The thick plastic frame struck his chubby cheek. Like an owl, she shot furtive glances around. No witnesses. Unless you counted the crane’s beady eyes staring in her direction.

The child wailed while his mother consoled. He nuzzled his face into her neck. She wrapped her arms around his buttocks then scanned the beach for answers.

The professor walked away. Why return to the scene and confess?The boy was fine.Besides, she had kept the wretched child from injuring defenseless birds.

By the time she neared the lecture hall she had absolved herself of any crime.

The mother rubbed the red blotch while her son hiccupped between soft cries. She picked up the glass frames and fingered the tortoiseshell design.

The professor opened the door. Soothing climate-controlled air cooled her body. She lamented the sacrifice of her favorite sunglasses. They were prescription and necessary for the summer months. She’d order a new pair. Her ophthalmologist’s attention to detail kept her as a regular customer. The professor closed the door behind her. So detailed in fact, for no additional fee he engraved patients names and cell phone numbers on their stems.

BACK TO ADULT FICTION