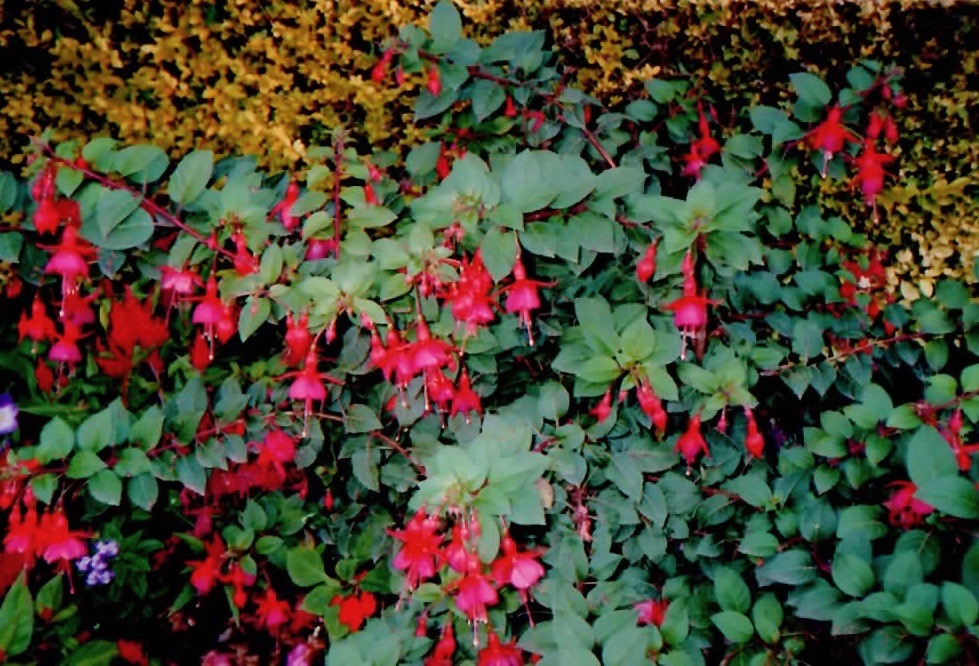 I was hand-on-heart hypnotized at my first sight of a flowering fuchsia in Grandville, France. Hundreds of delicate blooms covered the manicured grounds of the childhood home, now a museum, of fashion designer Christian Dior. The purple and pink blossoms whirled in the ocean breeze like miniature ballerinas en pointe. I sniffed one of the tiny dancers, hoping for a hint of perfume. A gentle gust of wind ruffled her skirt. This visual delight compensated for her lack of scent. The couture museum grounds provided a perfect showcase for such a fashionable flower.

My journey continued to Scandinavia where I was greeted by an abundance of blossoming fuchsias: in gardens, window boxes, as full hedges, and even indoor plants.

I explored a small village cemetery in Norway. The passionate gardener cultivated several varieties of fuchsias. The green lawns, white steepled church, and blue skies were the perfect backdrop for the colorful flowers. Like puppets dangling from strings, the blooms draped across ancient headstones in hues of light pink to dark plum. I envied my long-dead Norwegian relatives.

A low-growing variety formed a dense groundcover under a maple tree. I felt like Gulliver in the land of Lilliput when a misplaced step crushed an entire chorus-line of pirouetting beauties.

The tutu shaped blossoms encouraged me to try, once again, to clear my black-thumbed reputation (neglected peonies, abandoned bird-of-paradise, mistreated snapdragons). My gardening successes were limited to no-fail marigolds and drought-forgiving moss roses. I pursued the fuchsia, my affaire d’amour, once I returned to Central Florida.

After a thorough but fruitless search through every local garden center, I resented my kinfolk who took these flowers for granted.

On the Internet I learned that in 1703, on a Caribbean island, Father Charles Plumier discovered the fuchsia. Plumier named the flower in honor of Leonhart Fuchs, a botanist who lived a century before.

While investigating the fascinating flower, I encountered conflicting opinions. Phrases such as, ‘fairly easy to grow’ and ‘they do not like bright sun, but neither do they like deep shade,’ sounded fairly finicky. The fussy fuchsia needed humid heat, not dry heat, but not too much heat, whether wet or dry. Oh my.

Finally, I learned you should give the fuchsia a daily misting if your ballerinas looked weary although the blooms were supposed to naturally droop. The words easy and exotic described the same flower. Was I up to the task of adopting such a high-maintenance plant?

I sipped fuchsia-colored wine and imagined the flirtatious and flamboyant tubular flowers seducing my dull, plain ivy. The slightest wind would flutter and twirl their skirts to nature’s tantalizing choreography.

After finding information on fuchsia varieties in Europe, I discovered The American Fuchsia Society website. They boasted eighty years of fuchsia growing experience. Members live in California and Oregon. I wondered why the western states kept these dazzling beauties a secret.

Fuchsias are non-toxic and allergen-free but I would have endured an allergy treatment for one shot at owning the plant. I wanted a living reminder of my Scandinavian ancestors and my European adventures.

One article stated, “Fuchsias do best in daytime temperatures of sixty or seventy degrees and ten-degrees cooler in the evening. Heat tolerant types exist but require cool evenings to recuperate from the heat of the day.”

Central Florida summer temperatures hover between eighty and ninety degrees. The humid heat lingers into the middle of the night. Twenty years before, midnight swims and flip-flops worn year-round motivated me to move south. Back then, how could I have known that a fuchsia-less Florida might prove disappointing?

The early evening eighty-degree warmth clung like a wet blanket as I stared at my hanging baskets of lonely ivy. Central Florida was no place to romance a fuchsia. Grateful for the opportunity to witness the splendor of fuchsias in climates where they thrived, I tacked worn travel photos to my refrigerator.

Two years later, when my dreams of a fuchsia were as far away as Grandville, France, the elusive plant appeared. My local discount store displayed seven pots of fuchsias next to wild sage and milkweed.

I pinched myself before grabbing two containers. The affair of my heart revived! I compared the shapes of tutus and leg lengths and determined the plants were different varieties. Both bore identical labels that simply read ‘fuchsia’ but lacked care or feeding instructions. I caressed the dainty petals and pea-sized buds and christened the new couple, Romeo and Juliet.

“Can’t grow ‘em in Florida.” A woman shook her arthritic finger. “Must have been shipped here by mistake.”

I cradled my flowers in a loving yet firm embrace then turned and met the cashier’s gaze.

A woman tapped my shoulder. “Where did you find those?” I recognized the look. Smitten, she left her place in line.

She returned with pale, pink-and-white beauties. We exchanged smiles; hers—innocent and naïve, mine—filled with apprehension. My scant knowledge of fuchsias taught me my clandestine tryst might be brief. Florida’s unrelenting summer heat was just weeks away.

Now, both sides of the checkout counter traded fond memories of fuchsias. Seven plants balanced in the hands of enthusiastic customers, each relived a time when they first encountered the unusual flower. There were sightings from Indiana to California but no one remembered seeing one here in Central Florida. I enjoyed the fuss myfuchsias had created.

A sunbaked man, his red face shadowed under a straw hat, leaned on a pansy-filled cart. “Can’t grow ‘em in Florida.”

I smiled but ignored the experienced gardener’s warning. With flushed cheeks of a woman who made love on her lunch hour, I raced to my Volkswagen and turned the air conditioner on high. The courtship had begun.

With the vigilance of a full-time chaperone, I monitored Romeo and Juliet morning, afternoon, and evening. I clipped spent blooms, watered, then paper-toweled excess moisture. My evening glass of merlot was swapped for a misting bottle.

The ivy resisted the intrusion. Their five-pointed leaves turned yellow then curled for lack of water. They had not agreed to date, much less get married. I felt like a two-timing lover when I replanted my loyal ivy in the back yard.

I continued to dote on my new romantic responsibility. My persistence produced plenty of blooms, but they were much smaller than the ones I encountered in Scandinavia.

The more I fawned, the fewer blooms appeared. I noticed a slight revival when I fed the fuchsias special food that cost more than my spoiled tabby’s gourmet blend. This was an expensive one-sided relationship.

Finally, a humid ninety-four-degree day enveloped Central Florida. Oppressive heat continued through the night. In the morning, no amount of affection aroused the wilted plants.

The story of Romeo and Juliet rang true. Their destinies linked with death the moment they landed at the wrong store in the wrong state. Five months after the affair began, my dear fuchsias, refusing to dig roots in their new hot-as-hell home, succumbed to the Florida heat.

I pulled brittle lifeless bodies from their baskets and bid them farewell.

This year my travels are closer to home. I’ve just learned of an Orchid Festival in Miami.