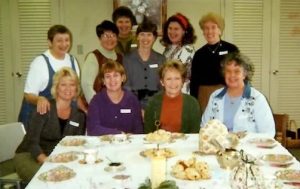 Sixteen years ago, I discovered the Literary Ladies: a small group of women who read a wide variety of fiction. I joined so I could be whisked away from day-to-day realities of war, the rising crime rate, and politics.

We lived by the caveat; never discuss religion or politics. I’ve learned this phrase was intended to warn (specifically) women against expressing their beliefs so they could maintain harmony in their relationships. My book club ladies, although silently, agreed with this notion.  Sure, eventually we learned of a certain woman’s religious affiliation or that another member was a staunch Republican. These were just facts. We were ‘Ladies’ you see, and it seemed improper to pry into anyone’s private religious or political beliefs.

Our group increased to fifteen women, consisting of a mix of northern girls and southern belles. We scribbled our titles on folded bits of paper and picked them from a cookie tin. We even served food to accompany our chosen titles. Often, we exchanged recipes and names of plumbers. We even broached the topic of sex, but never religion, and certainly not politics. Our group began choosing meatier authors and chewed on the likes of Steinbeck and Faulkner.

Our favorite bookshop shelves were groaning with political titles. A woman and an African American had entered the race. Things were different this time.

One day our youngest member told us about her background in political science. We listened as she shared why she didn’t continue in politics. I nodded my head along with the others: politics is a filthy business. Then one member said meekly, “But someone has to be in office.”  Another piped up, “Maybe it’s time a woman got the job.” Silence.

Groups of two and three broke away from the main and whispered. I was concerned that our solid friendships would be shattered by politics. We had crossed an invisible boundary into new, and to some of us, frightening territory.

Then one of our daring members put a political nonfiction title into the tin. Two ladies said they wouldn’t come to the next meeting (what I feared most). We discovered some had very strong opinions on the subject of politics. And others like myself had a self-perceived ignorance.  This book proposal was such a departure that we had a discussion about having the discussion!  What was politics doing to my book club?

Eventually, the women who said they wouldn’t come, showed. And yes, there were slightly raised voices, and even several, “I never would have believed you thought this way!” But what I marveled at most was how much we were able to discuss, debate, and even disagree, all while remaining friends, good friends. Lines of true communication had opened. We feasted on red, white, and blue cake: a peace offering no doubt, from the woman who suggested the book.

Since that day many titles have brought us back to the subject of politics. A book about quilts used as codes in the Underground Railroad led us to discuss civil rights. While another, set in Afghanistan, caused us to talk about war and environmental concerns. Where would our new leader stand on these issues?

That was over eight years ago. We are now facing another election.

The group has learned there is no place too sacred or relationship too fragile to shy away from tackling important subjects. Without a healthy exchange of views, there will be no change. Some Literary Ladies have switched political parties, while others have even ‘checked out’ other religions.